This year’s show brings an interesting mix of actors from some of horror fans’ favorite 80’s and 90’s films, including:

Tickets are $100 for VIP, $40 for weekend, $15 for Friday, $20 for Saturday and $10 for Sunday.  Active duty military and veterans receive one free single day admission with valid ID. Children 12 and under are free with an adult admission.  Tickets may be purchased at the door or in advance online through Showclix at www.showclix.com/event/horror-realm-con-2017.

The convention returns to the Double Tree by Hilton Pittsburgh Green Tree hotel, located at 500 Mansfield Avenue, Pittsburgh, PA  15205.  The hotel features ample free parking, an indoor pool & whirlpool and on-site convenience store/snack shop.  A special group room rate of $109 plus tax per night is being offered.  Details are available at www.horrorrealmcon.com.

This year’s convention is sponsored in part by Pop Culture Comics, a family-owned business in Pittsburgh located on Mt Royal Boulevard, offering a range of new and second-hand pop culture merchandise and comic books. They are an authorized retailer for DC Comics, Marvel, Dark Horse Comics, NECA, Mezco Toyz and more. Founded with an enthusiasm for the 1980s, Pop Culture Comics hopes to become your go-to shop for both new and old collectibles, trades, toys, original movie posters, and comics.  Visit their web site at www.buypopculture.com. 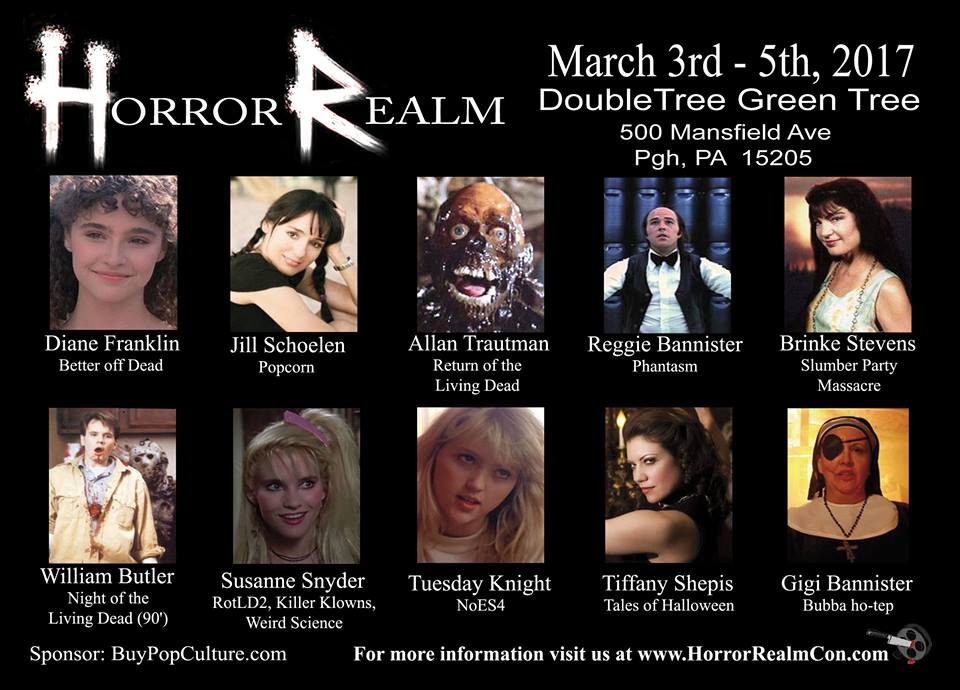