Pittsburgh, PA – On September 8, 1966, Star Trek made its television debut on NBC. The series initially struggled from a ratings standpoint, but managed to remain on the air for three years and 79 episodes nonetheless. Fifty years later, however—as well as four additional television series and thirteen films—the Star Trek franchise is stronger than ever, encompassing millions of fans from both across the nation and around the world.

That, of course, includes Pittsburgh, Pennsylvania, and beginning Friday, September 2, 2016, the Steel City will celebrate Fifty Years of Star Trek with special screenings of numerous Star Trek films at both the Row House Cinema in Lawrenceville and the Hollywood Theater in Dormont, as well as an exhibit of original comic book art at the ToonSeum that opens on October 28, 2016.

Row House Cinema kicks off the celebration with week-long screenings of the most popular films from the franchise, including Star Trek: The Motion Picture, Star Trek II: The Wrath of Khan, Star Trek IV: The Voyage Home, and Star Trek VIII: First Contact. Plans include a RiffTrax Edition of The Wrath of Khan, featuring “snarky commentary” from members of Mystery Science Theater on September 2nd, a Saturday morning screening of Star Trek: The Motion Picture—replete with cereal—on September 3rd, and a Dr. Sketchy’s Drink and Draw coinciding with the Wednesday, September 6th, screening of The Voyage Home.

The spotlight then shifts to the Hollywood Theater on Friday, September 9th, with a special screening of Star Trek: The Wrath of Khan. Sponsored by Geek Pittsburgh, the evening promises to be a memorable one, with members of local fangroups the USS Inferno and Klingon Assault Group in attendance, DJ Zombo spinning tunes from 6pm until 7:30, a costume contest and even a pop-up art gallery. All proceeds from the event benefit the Hollywood Theater and the ToonSeum, Pittsburgh’s premier museum of the cartoon and comic arts.

Screenings of the Star Trek film franchise only mark the beginning of Pittsburgh’s celebration of the USS Enterprise and its crew, however, as the ToonSeum will premier it’s To Boldly Go: The Graphic Art of Star Trek exhibit on October 28, 2016. Featuring original artwork from the full gambit of Star Trek comic books published by DC, Marvel and IDW that stretches back to the 1960s, To Boldly Go offers to be a unique and fitting tribute to Fifty Years of Star Trek in-and-of itself.

Attendees to the Star Trek: Wrath of Khan screening at the Hollywood Theater on September 9th, meanwhile, will get a special, one-night “sneak-peak” of the upcoming ToonSeum exhibit, as original artwork by some of Pittsburgh’s best graphic illustrators—created exclusively for To Boldly Go—will be on display at the Hollywood Theater.

Pittsburgh has numerous ties to the Star Trek franchise that, like the series itself, go back decades. Leonard Nimoy, who portrayed Mr. Spock on the original series, made his Shakespearean debut at the Pittsburgh Public Theater in 1975, for instance, while fellow cast members William Shatner, DeForest Kelley, James Doohan and George Takei attended a Star Trektacular convention at the William Penn Hotel that same year.

William Shatner made numerous visits to the Steel City at the turn of the last century as research for his book I’m Working on That: A Trek From Science Fiction to Science Fact, co-written with local science author Chip Walter, while George Takei spent the summer of 2012 in the region while filming Nickelodeon’s Supah Ninjas.

And then there’s Zachary Quinto, the current Mr. Spock in the new slate of big screen movie adventures, a Green Tree native who attended Central Catholic High School in Oakland as well as Carnegie Mellon University before heading to Los Angeles and the planet Vulcan.

Star Trek premiered on NBC the evening of September 8, 1966, and for Fifty Years has inspired scientists and engineers both young and old alike, entertained generations and left an indelible mark on pop culture across the nation and around the world. Thanks to the Hollywood Theater, Row House Cinema and the ToonSeum, Pittsburghers will be able to commemorate and celebrate the achievements of the USS Enterprise while likewise wishing the Star Trek franchise fifty more years of unprecedented achievements.

Tickets for Row House Cinema’s 50th Anniversary of Star Trek can be purchased online at www.rowhousecinema.com/.

Tickets for the Hollywood Theater’s Steel City Celebration of Star Trek can be purchased online at www.eventbrite.com/e/a-steel-city-celebration-of-star-trek-tickets-26626949924. 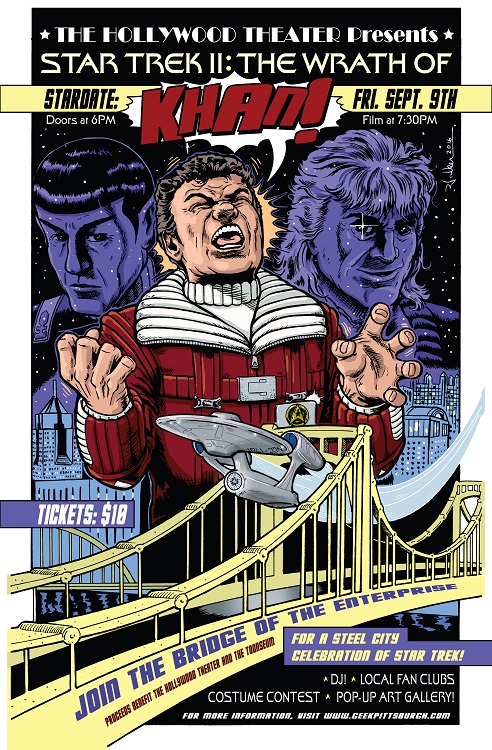